What could be more ideal than a 6,500-mile road trip around the perimeters of the Great Lakes?

Each individual lake also has its own circle tour. Marked by distinctive green and white signs, the Tour passes through eight states and one Canadian province, primarily on the historic Blue Highways of the old road maps with spur routes such as the Lake Michigan car ferry.

Along the way are small towns, nostalgic roadside attractions, friendly people, and small businesses who are happy to see you pass their way. Let’s look at a few of the highlights along “North America’s Fresh Coast,” starting in Upstate New York at the eastern end of Lake Ontario.

Lake Ontario is the smallest of the Great Lakes. The Great Lakes Seaway Trail is a 518-mile scenic driving route that follows the shores of the St. Lawrence River, Lake Ontario, the Niagara River, and Lake Erie in New York and Pennsylvania.

One of the first roads in America to be designated as a National Scenic Byway, the Great Lakes Seaway Trail includes unique historical locations and cultural heritage sites in addition to outstanding views and scenic vistas.

The magnificent Niagara Falls include the Horseshoe Falls, the American Falls, and the Bridal Veil Falls. The area is well-supplied with small wineries that offer tours and wine tasting opportunities.

Charter fishing for salmon, trout and bass is a big attraction, as is sailing. In the Toronto Harbor, a traditional three-masted schooner offers outstanding tours. The “tall ships” still sail Lake Ontario.

Lake Erie’s Presque Isle State Park near Erie, PA isn’t to be missed. This ancient sand spit extending into Lake Erie was made famous by Commodore Perry, who sheltered here while building the ships with which he won the 1812 Battle of Put-In Bay, the biggest naval battle of the War of 1812.

The Ontario side of Lake Erie features Long Point National Wildlife Refuge jutting from the mainland on a narrow sliver of land. Travelers turn north along the Detroit River, through Detroit/Windsor and around Lake Saint Clair, continuing north along the St. Clair River to the southern end of Lake Huron.

Lake Huron is the second largest of the Great Lakes. Both the Michigan and Ontario sides of Lake Huron are supplied with scenic lakeshore drives.

The Michigan shoreline follows the “mitten” outline around the “thumb” and on to its highest point at the Straits of Mackinac where Lake Huron meets Lake Michigan. Picturesque lighthouses dot the Lake Huron shoreline, many of them originally built early in the 19th century.

The Ontario portion includes Georgian Bay and is particularly well-supplied with provincial parks.

The two sides meet at the Saint Mary’s River, leading to the twin cities of Sault Ste Marie, Ontario and Sault Ste Marie, Michigan. Here, a series of locks enable Great Lakes freighters to traverse the rapids and enter the lower Great Lakes from Lake Superior. Tours of the Soo Locks are available in the warmer months.

The 80-mile stretch west from Whitefish Point to Munising is known as the ‘Shipwreck Coast,’ with over 550 known shipwrecks recorded and a favorite of divers.

This same stretch of deceptively peaceful and picturesque shoreline is home to Pictured Rocks National Lakeshore, offering some of the best scenery in North America, with giant limestone bluffs towering above the water of the south shore.

At least a hundred waterfalls grace the Upper Peninsula. A trip to Isle Royale National Park is a trip that hardy primitive campers dream about. The Trans-Canada Highway swings north of Lake Superior for some distance through heavily wooded lands with many small lakes. Several provincial parks and nature reserves provide public access to this pristine wilderness area.

Lake Michigan is the only Great Lake located entirely within the United States. Starting at the eastern tip of the Upper Peninsula, travelers can follow the scenic lakeshore over 300 miles into Wisconsin.

The Door Peninsula is one of Wisconsin’s most picturesque vacationlands. At Manitowoc, a popular car ferry allows for a “short-cut” across the lake to Ludington, avoiding the larger cities farther south. Once past Gary, Indiana, a stop at Indiana Dunes National Lakeshore is a must.

Restored Fort Michilimackinac, founded in 1715, is open for tours during the summer months. Lake Michigan officially ends at the Straits of Mackinac and the Big Mac Bridge to the Upper Peninsula. 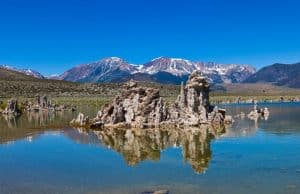