International lakes – lakes that border two or more countries – give their visitors incredible opportunities to experience the cultural differences that define each country.

These lakes also highlight the importance of international cooperation to preserve these vital, shared natural resources. Below are a few of our favorite international lakes.

Amistad is the Spanish word for friendship. This 65,000-acre lake is the crown jewel of Texas’ Amistad National Recreation Area.

The Amistad dam and reservoir were built jointly by the American and Mexican governments from 1964 to 1969 – for flood control, water conservation, irrigation, hydropower, and recreation – at the confluence of the Rio Grande, Devils and Pecos Rivers.

The three rivers and striking limestone cliffs create the perfect backdrop for the 4,000-year-old Native American rock art that adorns cliff walls and caves. These mystical, prehistoric drawings are accessible via boat or land.

Lake Victoria is one of the eight African Great Lakes, a chain of sapphire lakes in East and Central Africa. Nineteenth century explorers debated for years whether Lake Victoria is the source of the great Nile River, the world’s longest river. American explorer Henry Morton Stanley (famous for his greeting “Dr. Livingstone, I presume!”) confirmed that Lake Victoria is in fact the Mouth of the Nile.

Although Lake Victoria extends into Tanzania, Kenya and Uganda, none of the three countries permits cross-border water travel. Visitors must choose just one country’s waters for their exploration of the lake.

Around the globe, it’s estimated there are around two million lakes, inland bodies of water that exist in a wide range of habitats and at many different elevations. Keep reading for amazing…

In 1609, French explorer Samuel de Champlain was the first European to discover this expansive glacial lake that covers more than 270,000 acres.

Lake Champlain stretches more than 100 miles in length between the Green Mountains of Vermont and the Adirondack Mountains of New York, with the northern tip reaching into Quebec.

In 1998, President Bill Clinton signed United States Senate Bill 927 designating Lake Champlain the nation’s sixth Great Lake. This status was quickly rescinded following media and public ridicule claiming that it is too small to be a “Great” lake.

Due to its irregular shape, Lake Champlain consists of five segments with unique physical characteristics, plus 71 islands that dot the crystal blue waters.

Lake Champlain is just as famous for its lake monster, Champ, as for its reputation as a year-round living and vacation destination. Champ has been sighted more than 300 times; a 1977 photo featuring Champ appeared in Time Magazine and the New York Times.

Romantic Lake Maggiore is nestled in the foothills of the majestic Alps. Spanning more than 52,000 acres, this glacial lake is Italy’s second largest lake. The northern tip of this spectacular lake extends into the Ticino province of Switzerland.

The mild Mediterranean-like climate of Lake Maggiore enables the growth of beautiful gardens that host rare and exotic plants. A great place to view these gardens is on the Borromeo Islands: Isola Bella, Isola Madre, and Isola Pescatori. Boat tours transport visitors to the castle-like homes and gardens of the Borromeo family.

With so much to see and do, be sure to spend some time enjoying the lake’s refreshing waters while swimming, sailing, water skiing, wake boarding, or scuba diving.

Rainy Lake flows into the also-international 950,400-acre Lake of the Woods (via Rainy River). The Rainy River also serves as an east-west border between the USA and Canada.

Two dams control Rainy Lake’s water levels and produce hydropower for both countries. Natural waterfalls, which once dropped 35 feet over a series of rapids, are now concealed by the Fort Frances-International Falls Dam.

See also: Lake of the Woods

Lake Constance is a strikingly beautiful 132,000-acre lake located in the northern foothills of the Alps along the Rhine River.

Surrounded by three countries – Austria, Germany, and Switzerland – the lake also consists of three distinct areas: the main section between Bregenz, Austria to the east and Konstanz, Germany to the west (Obersee), the northwestern arm (Uberlingen), and the southwestern arm (Untersee).

Visitors will discover ancient castles, baroque churches, picturesque villages, vineyards, and curious museums around the lake. The 169-mile Lake Constance Trail encircles the entire lake, providing hikers and bikers the opportunity to experience the cultural differences that define each country.

Lake Constance is also a haven for all types of water sports; sailing and windsurfing are popular due to fairly steady winds.

Islands dot the surface of Lake Constance, and three islands are “must see”: Mainau, known as the flowering island; Reichanau, a World Heritage Site because of its ancient monastery; and Lindau, adorned with a large promenade, medieval old quarter, and a beautiful harbor marked by a stone lion and lighthouse.

Lake Osoyoos straddles the border of Washington state and British Columbia in a semi-arid region known as Desert Wine Country. This region has low annual rainfall and is located in Canada’s only desert, the northernmost tip of the Sonora Desert.

This 5,700-acre lake offers visitors on both sides of the border a welcome oasis with shady trees, lush lawns, and sandy shores.

During the 1800s, the Lake Osoyoos region was known for fur trading, cattle driving, and gold mining. The quaint town of Oroville, Washington was named for the gold mines (“oro” is the Spanish word for gold). Visitors can still pan for gold along the Okanagan River, which flows into the lake.

Today the lake is known for orchards that produce grapes, cherries, apricots, pear, peaches, plums, and apples. The town of Oliver, BC, is considered the wine capital of Canada with annual wine festivals and wine tastings.

The Lake Osoyoos climate is ideal for camping, hiking, golf, and every imaginable water sport. In winter, the region offers ice skating, ice fishing, and downhill skiing within an hour’s drive of the lake.

Located astride the border of Peru and Bolivia is the largest freshwater lake by volume in South America: Lake Titicaca. High in the Andes Mountains at an elevation of 12,507 feet, this million-year-old glacial lake is one of the world’s highest-elevated commercially navigable lakes.

All along the shoreline are native villages where traces of those villages’ rich Indian past still exist without interference from the 21st century. Incan mythology states that Lake Titicaca is the place where the world was created. The Incan god, Viracocha, arose from the lake and created the sun, the stars, and the first people.

Swampy areas that fringe the lake produce totora, a versatile balsa reed that is important to the local way of life. The Uros people of Peru build islands and houses that float on the water from the totora reeds. Around Puno, the capital of the Puno Region, there are over 60 floating villages on Lake Titicaca.

The biggest island on the lake, Isla de Sol, is located on the Bolivian side and contains over 180 ruins from the Incan period. Puno, Peru and Copacabana, Bolivia are scenic launch points for your exploration of Lake Titicaca.

Shaped like a crescent moon, Lake Geneva is cradled in the Alps Mountain Range with two-thirds of its 104 shoreline miles in Switzerland and the rest in France. Flanked by the majestic Matterhorn, this 144,000-acre lake is the largest freshwater lake in Western Europe.

Lake Geneva lies along the shores of the Rhone River, fed by the Rhone Glacier high in the Alps. The Rhone flows through Lake Geneva and exits at the City of Geneva, flowing through France on its way to the Mediterranean.

Lake Geneva can be explored by water or on foot. Hiking the region’s Discovery Trails provides amazing birds-eye views of the lake and of quaint Alpine towns below.

In winter, Lake Geneva transforms into one of the most beautiful regions in the world. The lake area comes alive with alpine and Nordic skiing, snowboarding, snowshoeing, and tobogganing. Lake Geneva is also home to delicious cuisines, calling upon unique influences from several surrounding countries. 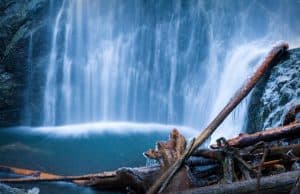 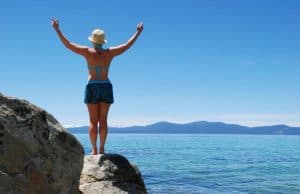 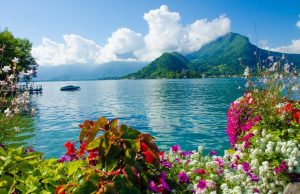